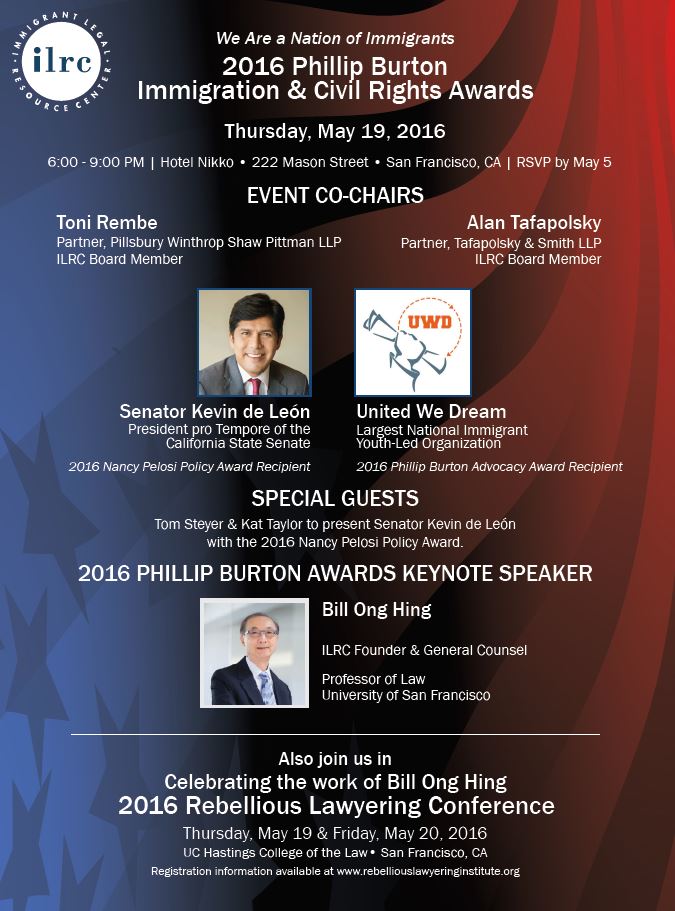 Senator Kevin de León (D-Los Angeles) is setting a bold agenda to move California forward. The first Latino elected President pro Tempore of the California State Senate in more than 130 years, he is leading the Senate of the largest state in the union and taking on challenging issues that strengthen the national reach of California’s policy-making.

Recently, the ILRC and Senator Kevin de León worked closely on the Immigrants Shape California Legislative Package, a series of 10 bills aimed at expanding justice to immigrants. De León credits his immigrant mother for teaching him the nobility of a hard day’s work and our shared obligation to build a brighter future for the next generation.

United We Dream (UWD) has worked across the nation to build the leadership of undocumented immigrant youth in the fight for fair and just immigration reform. Now the largest national organization of DREAMers with over 100,000 immigrant youth, UWD works with around 55 affiliates in 26 states and runs one of the largest national campaigns to help stop deportations. UWD was one of the primary organizers and advocates for administrative changes that ultimately resulted in expanding Deferred Action for Childhood Arrivals (DACA) and creating Deferred Action for Parents of Americans (DAPA).

UWD’s work has evolved to not only inform and empower DREAMers, but also their families. They engage community members across the nation to inform immigrants about developments in immigration policies and law. We proudly recognize UWD’s contributions in the fight for immigrant rights with the 2016 Phillip Burton Advocacy Award.